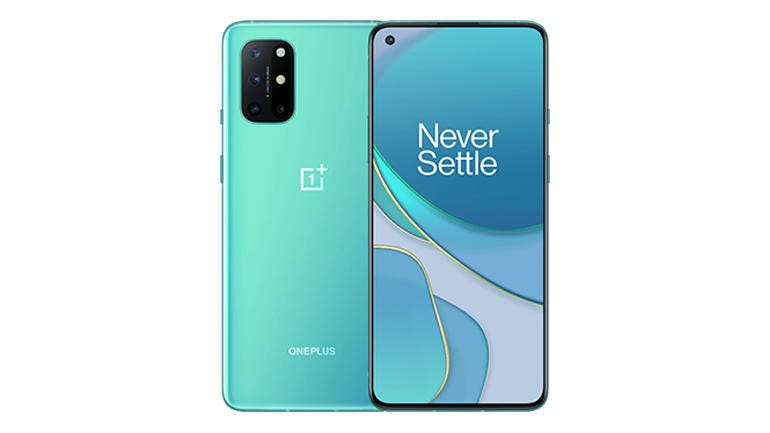 With the OnePlus 8T, OnePlus is maintaining its product release pattern of recent years, with a flagship handset in the first half of the year and a 'T' release following in the second half. So, in spring we had the OnePlus 8 and OnePlus 8 Pro, and now comes the OnePlus 8T. In between (in Europe) we've had the OnePlus Nord, a mid-ranger that took OnePlus back to its roots of providing an attractive combination of high specification and low price. Let's see how the OnePlus 8T fits in.

The Gorilla Glass 5 back is slippery in the hand and prone to sliding off surfaces, while the protruding lozenge that frames the camera array is off-centre (on the left), so the handset rocks when laid flat and the screen prodded. None of this is unusual for a current phone, but it's a pleasant surprise to note that the back seems completely resistant to fingerprints.

The sides of the phone are aluminium, with the volume rocker on the left and the power button on the right, accompanied by OnePlus's trademark alert slider that's so useful for toggling between vibrate, silent and sound-on modes. The in-screen fingerprint sensor worked quickly and effectively for me.

Like the OnePlus 8, the OnePlus 8T lacks an IP rating for dust and water resistance. If you want the reassurance of an IP68 rating ('dust tight' and capable of immersion in 1.5m of water for up to 30 minutes), you'll need to look at the OnePlus 8 Pro (from £799 inc. VAT/$799).

The OnePlus 8T has a flat screen. While the company has been a champion of the curved screen, it reverted to a flat screen for the Nord and has also gone with flat here.

This may be a response to criticisms of the curved screens in the OnePlus 8 and 8T, which were twofold: first, accidental touches can make interaction annoying at times; and second, content that curves around the screen edge is more difficult to read. Curved screens may be showy, but flat ones are more user-friendly.

The OnePlus 8T's 6.55-inch AMOLED panel has a resolution of 2,400 by 1,080 pixels (402ppi) and is sharp and vibrant. Its 120Hz refresh rate (up from 90Hz on the OnePlus 8) makes for fast transitions, and there's virtually no lag as you sweep and swipe around. Although the Xiaomi Mi 10T Pro 5G offers a 144Hz refresh rate, 120Hz is still a premium specification. If you select the higher refresh rate in system settings, the handset will dynamically decide when to revert to 60Hz depending on what you're doing at the time.

There's a small punch-hole in the top left of the screen for the 16MP front camera and a tiny all-round bezel. The screen to body ratio is 86.9%.

The OnePlus 8T is one of the first smartphones to ship with Android 11, and OnePlus has taken the opportunity to rework its Oxygen OS overlay which is now also at version 11. The most striking feature in this respect is a design revision that aims to make one-handed use easier. So, for example, on settings screens there's a gap towards the top of the screen with all the tappable elements lower down. This is definitely easier to navigate one-handed, but the convention doesn't follow all the way through settings: digging deeper, and using applications in general, still requires you to reach around the whole screen.

Still, Oxygen OS is one of the better Android overlays -- unobtrusive, with some useful extras. I remain a fan of OnePlus's Reading Mode, for example, which provides both a monochrome screen and a washed-out chromatic effect screen. Importantly, Reading Mode can be set to kick in automatically when specific apps are started.

The OnePlus 8T supports 5G and can accommodate two SIMs at once. There is no provision for storage expansion via MicroSD.

The 4,500mAh battery lasted for 13 hours 45 minutes under the PCMark for Android Work 2.0 battery life test. When asked to play video for three hours non-stop at full screen it lost 11% from a 100% charge. On this basis, it's probably going to get you through a day -- but if it doesn't you can always take advantage of the very impressive 65W Warp Charge 65. You'll need to use the provided power adapter and cable, but if you do, charging capability is exceptional.

There are four rear cameras, three of which are the same as those on the OnePlus 8: 48MP f/1.7 wide angle with OIS; 16MP f/2.2 ultra-wide angle (123° FoV); and 5MP f/2.4 macro. I found that the main and ultrawide cameras produced good shots, but the macro camera, which lacks autofocus, could be better.

The fourth camera is a monochrome 2MP f/2.4 unit that comes into play as you flick through colour filter options, but it's not the same as having a black-and-white camera that functions independently. As with the OnePlus 8, there's no telephoto camera -- for that, again, you'll need the OnePlus 8 Pro. The 8T's 16MP f/2.4 selfie camera performed perfectly well.

The OnePlus 8T is a solid mid-range 5G smartphone with two standout features: a superbly sharp and vibrant 6.55-inch AMOLED screen with a fast 120Hz refresh rate; and 65W fast charging that can fully charge the 4,500mAh battery in just under 40 minutes.

The addition of these features adds £50/$50 to the price of the otherwise very similar OnePlus 8 (with 12GB RAM and 256GB of storage). If you don't need them, the earlier 2020 handset remains an excellent choice.

Every iPhone 12 model from mini to Pro Max: Prices, specs, and availability

The 10 best smartphones of 2020: Z Fold 2 tough to beat for productivity