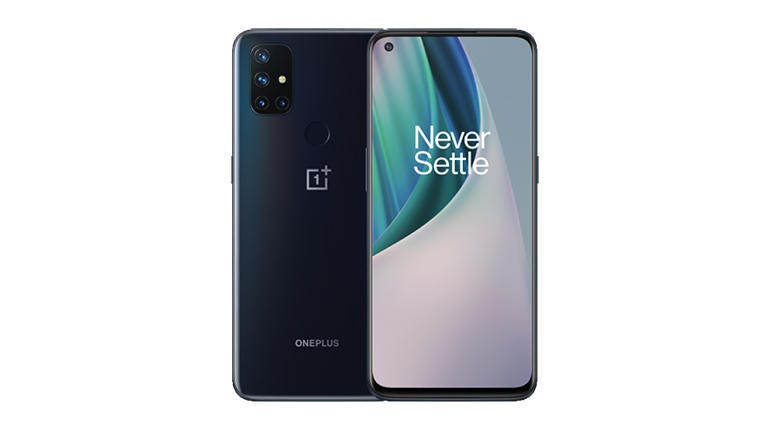 When OnePlus launched the Nord in July, it was presented as a return to the company's roots of selling high-quality smartphones at an affordable price. The Nord pretty much delivers in this respect, although its starting price of £379 (inc. VAT) is towards the high end of the budget sector. Now we have the Nord N10 5G, which is £50 cheaper at £329 and so fits more comfortably into this price band. But what has been jettisoned to achieve this, and are the sacrifices acceptable?

OnePlus has opted for plastic on the back of the Nord N10 5G, so you might want to protect it against drops with a bumper case. However, there's no case provided with the phone, which – like the Nord – also lacks an IP rating for dust and water resistance. The only colour choice is a deep Midnight Ice blue that changes hue as it reflects the light, but also picks up fingerprints rather easily.

The camera lozenge protrudes from the upper left edge at the back, which causes the phone to roll about a bit on a desk when the screen is tapped or swept with a finger. There's a fingerprint sensor at the back too, in the middle, above the OnePlus logo; you can also use face-unlock for authentication if you prefer.

The left side houses a volume rocker, the power button is on the right, and there's a 3.5mm headset jack, a USB-C port and a speaker grille on the bottom edge, with another grille for stereo output sitting just above the screen. Sound quality is fine for a handset at this price, with good bass tones; top volume is not as loud as on some phones, but it's perfectly adequate.

A notable absentee is the alert slider that has become something of a signature feature for OnePlus, and is present on the original Nord. The slider is a feature that endears OnePlus phones to me, allowing you to quickly put the phone into ring, vibrate, and silent modes. Without this distinguishing feature, the Nord N10 5G is arguably just another handset hovering around the £300 mark, and it's a pity OnePlus couldn't have found the budget to include it.

The 6.49-inch display has a resolution of 2,400 by 1,080 pixels (406ppi). It's an IPS panel rather than AMOLED, as seen on the Nord. While the Nord N10 5G's IPS display is less punchy, I found it perfectly fine to use and the 90Hz refresh rate made for zippy screen refreshes and good responsiveness compared to handsets with 60Hz displays.

There's a noticeable bezel beneath the screen, and the front camera sits in a punch-hole in its top left corner. The screen size means this is a fairly large phone to pocket, and most hands will probably struggle to reach across all of the display. That's just the trade-off to be faced for larger screens. That bigger bottom bezel means the Nord N10 5G's screen-to-body ratio is lower than that of the 6.44-inch Nord: 83.5% compared to 86.2%.

Although the alert slider is gone, OnePlus has retained its Reading Mode setting, which turns the screen monochrome and which can be set to kick in automatically when specific apps are launched. This is a feature of OxygenOS – the OnePlus Android overlay (version 10.5 here) that complements Android 10.

The Nord N10 5G supports two SIMs and, as the name suggests, is a 5G phone. There is 6GB of RAM and 128GB of internal storage, of which 25GB is used out of the box leaving 103GB free. This can be boosted with a MicroSD card, if you're prepared to sacrifice one of the two SIM slots. The original Nord had 8GB/128GB in its entry-level £379 configuration and 12GB/256GB in the £469 model. Unlike the N10 5G, the original Nord lacked MicroSD storage expansion.

OnePlus uses Qualcomm's 8nm Snapdragon 690 chipset in the Nord N10 5G, which is less powerful than the Nord's 7nm Snapdragon 765. This results in lower benchmark scores for the Nord N10 5G under Geekbench 5 – 608 vs 620 (single core) and 1866 vs 1951 (multi core). Although the performance of neither Nord phone approaches that of the Snapdragon 865-powered OnePlus 8, I found the Nord N10 5G nippy enough in daily use.

There are four cameras at the back: 64MP f/1.79 wide-angle; 8MP f/2.25 ultra-wide-angle (119°); 2MP f/2.4 macro; and 2MP f/2.4 monochrome. Limited testing suggests that the ultra-wide-angle camera tends to produce darker, less pleasing images, which is rather a shame, as high-quality wide-angle shooting can often deliver better-composed photos. Overall, even though there's no telephoto camera, point-and-shoot photography is acceptable.

The front-facing camera is a 16MP f/2.05 unit that delivers perfectly passable selfies.

The Nord N10 5G's 4300mAh battery powered the handset for a creditable 18 hours and 19 minutes from a full charge under the PCMark for Android Work 2.0 battery life test. That's some distance ahead of both the OnePlus Nord and the flagship-class OnePlus 8:

If you're a keen video viewer, you might consider that dropping 21% in three hours of full-screen YouTube streaming is a bit more than you'd like. Many handsets I've tested drop less than this under the same regime. Still, with mainstream workloads you should get at least a day's life from a full charge. Fast charging is catered for by the OnePlus 30W WarpCharge adapter that's provided in the box, but there's no wireless charging.

Without OnePlus's distinctive alert slider, the Nord N10 5G is in danger of being 'just another phone for around £300', although the Reading Mode that's part of the OxygenOS overlay is present, and battery life is good. Still, it's probably worth shopping around to see what £329 will get you if that's your top budget – and whether you can stretch to another £50 for the OnePlus Nord with its AMOLED screen, faster processor and 8GB of RAM.