Galaxy Fold to unfold in Singapore on September 18

Initially slated for launch in April, the Samsung foldable smartphone will be available in Singapore at the recommended retail price of SG$3,088, with the Cosmos Black model to be launched first on September 18, followed by the Space Silver on September 21.
Written by Eileen Yu, Contributor on Sept. 5, 2019 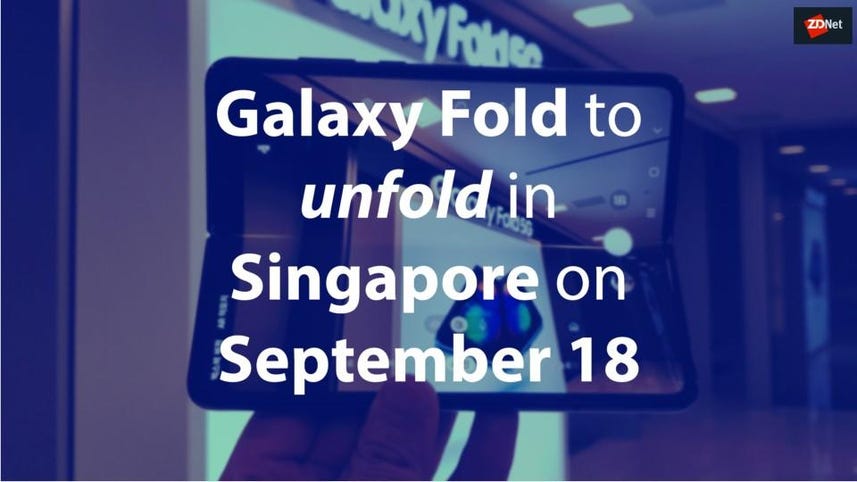 Samsung Electronics is finally ready to debut its foldable smartphone, months after cancelling the initial April 2019 launch date when reports of faulty displays emerged. Promising "improved" design, the South Korean device maker says the Cosmos Black model of the Galaxy Fold will be available in Singapore from September 18, with the recommended retail price of SG$3,088 ($2,218).

This will be followed by the Space Silver edition on September 21. Both options are the LTE variant and will be available at all three local mobile operators -- M1, Singtel, and StarHub -- as well as the Samsung Experience Store in Vivocity, it said in a statement Thursday.

The Singapore launch is part of a second wave of releases that also includes Germany, the UK, and the US, and after the smartphone made its debut in South Korea on September 6.

The smartphone maker said it had spent the time since the scrapped April launch fine-tuning the device's performance. "During the past several months, Samsung has been refining the Galaxy Fold to ensure it delivers the best possible experience," it said. "Not only have we improved the Galaxy Fold's design and construction, but we also took the time to rethink the entire consumer journey."

Initially scheduled for launch in April, its debut was delayed after multiple reports from early reviewers that the folding screen broke after a couple of days of usage. Samsung then attributed the problems with the display to "impact on the top and bottom exposed areas of the hinge".

Customers that purchase the Galaxy Fold will also have access to Samsung's Premier Service for a year, from date of purchase, which is a customer care programme that offers 24/7 service support, two door-to-door delivery service tickets for device repair, and a one-time screen replacement or repair of the smartphone's internal, foldable screen for a payment of SG$200.

They also will received a range of other services including 30-day one-for-one exchange for functional defects and diagnostic checks.

Samsung said it worked with partners to design "an entirely new" user experience that would "change the way" customers use mobile devices by leveraging the phone's foldable design.

The company is offering 24/7 phone support for those willing to pay for the foldable smartphone.

Samsung gives you another reason to hold off on those 2019 smartphone upgrades.

Only the 5G versions of the Galaxy Note 10 devices are currently being sold in South Korea.

The delisting of South Korea as a favoured trade partner may have long-term consequences for the global production of tech goods.

Samsung leader JY Lee has told the company's semiconductor and display businesses to make contingency plans in the event that the trade dispute between South Korea and Japan continues to drag on.

Smartphones
Scribble me this: The uncertain future of note-taking apps

Tablets
How to hide apps on your iPhone