Laptops labelled mid-2015 to be sent away for a fortnight.
Written by Chris Duckett, Contributor on June 20, 2019 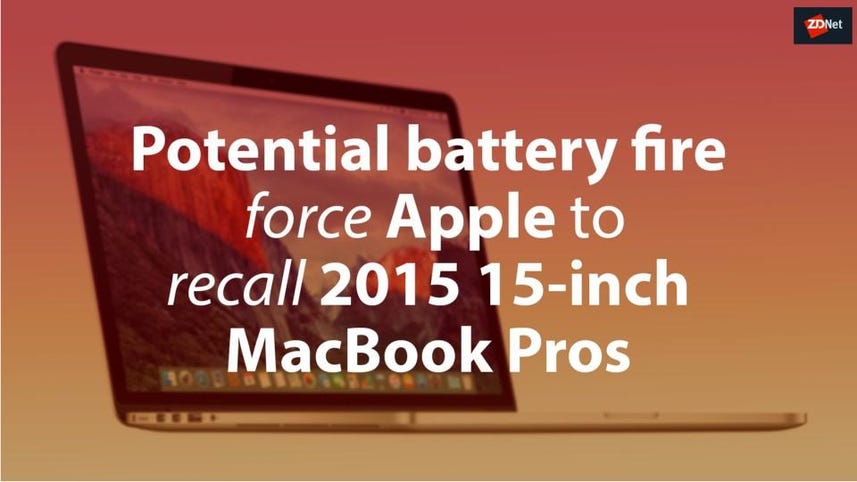 Apple issued a recall on Thursday warning users of potential issues with the battery in its 2015 MacBook Pros.

"In a limited number of older generation 15-inch MacBook Pro units, the battery may overheat and pose a fire safety risk," Apple said in a support note.

"Affected units were sold primarily between September 2015 and February 2017 and product eligibility is determined by the product serial number."

Users of MacBook Pros can find out if they are affected by heading to the Apple menu, selecting About This Mac, and seeing if their model name is "MacBook Pro (Retina, 15-inch, Mid 2015)". If so, Apple is asking users to head to its support page to enter the machine's serial number to see if they are eligible for the recall.

"If your MacBook Pro is eligible, please stop using it," Apple said.

Cupertino said devices will be sent to one of its repair centres for 1 or 2 weeks.

In that instance, the recall covered batteries sold between April 2015 and December 2018.

The most famous instance of devices catching fire was the Note 7 fiasco in 2016-17.

Although Samsung sourced batteries from two suppliers, Samsung SDI and ATL, both batteries had issues that led to fires.

Samsung Electronics took the blame for setting the battery target and signing off before the launch of the ill-fated device that was eventually removed from the market.

Three big iPhone problems Apple might not be able to fix

Even Apple, with hundreds of billions in the bank and billions more rolling in every quarter, has problems that the company is finding hard to solve.

Nearly 1,000 Best Buy stores across the US will now offer certified repairs for Apple products.

iPhone upgrades? I dread going to the Apple Store, and that's a problem for Apple

David Gewirtz readily admits to being a little retail-avoidant, but his experiences at the Apple store are the stuff of legends. He suggests that if Apple were to incorporate a regular trade-in program with its other subscriptions, there has to be a path outside the dreaded Apple Store.

iOS 13 will actually save you money

iOS 13 helps you remind you of those forgotten app subscriptions.

Path Finder 8 is an expansive macOS Finder alternative. Here's how to wield Path Finder to your advantage.

How to use the iCloud for Windows app (TechRepublic)

Apple and Microsoft are making it easier for users to access iCloud across Windows 10 PC and Apple devices. Here's how.