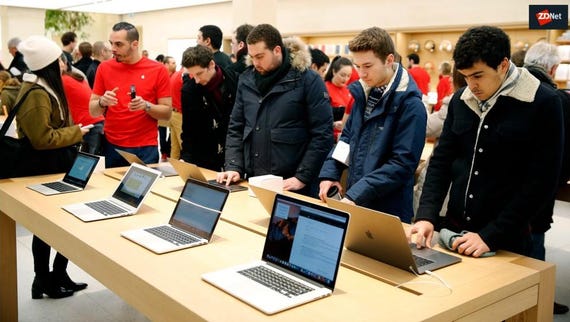 MacBook Pro: A few things to consider (besides its price)
Watch Now

So, I fired up the Apple Store app on my iPhone, tapped a few options, clicked "Buy," handed over thousands of dollars to Apple, and got a new MacBook Pro delivered the next day.

As one might expect, the buying process itself was as stress-free and tranquil as you could imagine. And that makes sense. After all, you are in the process of making a pretty big financial investment.

But scratch beneath the surface of that buying process and it's easy to notice the cracks.

The first problem is the hardware selection on offer.

When planning to buy a Windows-based PC, there's almost no end of options from a wide array of OEMs. Want a certain kind of laptop with a specific screen size and battery life? Chances are good that, with a bit of internet sleuthing, you'll find one that matches your needs.

When buying from Apple, that's all different.

While, on the face of it, it seems that Apple has a broad selection of hardware on offer, in actual fact it doesn't. First off, you can rule out the older than dirt stuff like the MacBook, iMac, and Mac Pro. So, for me, I wanted a MacBook Pro, which meant a 2017-model 13-inch without the Touch Bar, or a 2018-model offered in 13- and 15-inch with the Touch Bar.

I wanted a 15-inch MacBook Pro, which meant going for one with the dubiously useful Touch Bar. Apple doesn't offer anything to compare to the Microsoft Surface line, or the myriad other convertible systems that run Windows. If I wanted a tablet, I have to go for a scaled-up iPhone running iOS.

Another thing to prepare yourself when buying from Apple is how ridiculously fast the prices go up when you start adding in the optional extras. Upgrading the Core i7 processor to a Core i9 adds $300. A RAM bump from 16GB to 32GB is an extra $400, and storage upgrades can add anything from $400 for a bump to a 1TB drive, to $3,200 for the 4TB drive option.

OK, but we all know that Apple hardware is expensive. It's a fact of life, and to Apple's credit, the buying process is smooth, and the new MacBook Pro was in my hands in well under 24 hours, with notifications along the way, and the ability to track my new machine all the way from dispatch to delivery.

But the price isn't all that's broken with Mac buying process.

Another stick in the bicycle spokes is how few connectivity options are offered. It's a case of "you can have any connectivity, as long as it's four USB-C ports and a headphone jack."

For someone who has been using Macs for a while, and who has accumulated a lot of USB and Thunderbolt 2 hardware, the switch to USB-C is jarring. You're either looking at a future that's hip-deep in docks and dongles, or large-scale hardware extinction.

Next is the migration process.

Apple has a Migration Assistant built into the macOS, and every time I've had to use it, I've found it to be very hit-and-miss, and the last time wasn't any different. It failed several times, leaving my new MacBook Pro sort of half set up, the time estimates it throws up are just guesses (if the Migration Assistant says the process will take a hour, plan on it taking an entire morning), the process bars are just visual nonsense (mine raced all the way to the end in a few minutes, but the process still took another couple of hours to complete), and at the end I was left with a nagging feeling that the process might not have completed successfully.

I'm also finding little things like printer settings haven't migrated over properly. It's small stuff, but the Apple ecosystem is such a tight one that it staggers me when the company can't manage to move a bunch of settings from one laptop to another.

My experience with migrating Windows PCs is completely different (well, except for the useless progress bars, which is a problem over on Windows too!). Apple needs to take a leaf out of Microsoft's playbook and make the data migration process more robust.

From a hardware point of view, other than silicon performance, most of the changes Apple has made between 2013 and 2018 feel like gimmicks. Using a USB-C port for charging feels like a massive downgrade from MagSafe 2, the Touch Bar is just a gimmick (it doesn't even have a consistent feel within macOS and Apple's own apps). In fact, I think the apps that make best use of it are those that are part of Microsoft Office. The larger trackpad is nice, but its reliance on haptic feedback, as opposed to a proper physical click makes it feel inconsistent.

I'm also torn on the value of Touch ID. It's nice as a login tool, but it seems to have broken my ability to use my Apple Watch to log in (it throws some error message about not being logged in to iCloud, which it is), it's weird that the Touch ID button has a physical click (which it didn't have on the iPhone or iPad, so from a tactile point of view it feels weird), and I'm surprised it doesn't replace the admin password within macOS, so I'm never sure whether to go for the Touch ID button or start typing my password.

I'm surprised just how unpredictable and erratic the integration of the hardware with the operating system and apps feels.

It's doubly weird that I'm left feeling that the best software experience I have had on my new Mac is the Touch Bar integration in Microsoft Office, and the ease of use of setting up Google Chrome.

Also: These are the things Apple customers hate the most

Since I know that people are going to ask about performance, let me address that briefly. Performance is good. Not "blow your hair back" good, but it still feels refreshing.

But the bottom line is that when you buy a new Mac, you're spending a large chunk of cash, and when what you're then faced with are problems like buggy migration, features that feel gimmicky and poorly implemented, and a sense that third-party apps do a better job of support the new hardware and software, confidence in the Mac platform as a whole takes quite a hit.

Join Discussion for: The downsides of buying a new Mac