The maker movement has gotten the bulk of its attention from hobbyists, garage makers, and educators. But making is also incredibly powerful for fostering growth, flexibility, and the innovative spark among small and large businesses alike.
Written by David Gewirtz, Senior Contributing Editor on May 2, 2019 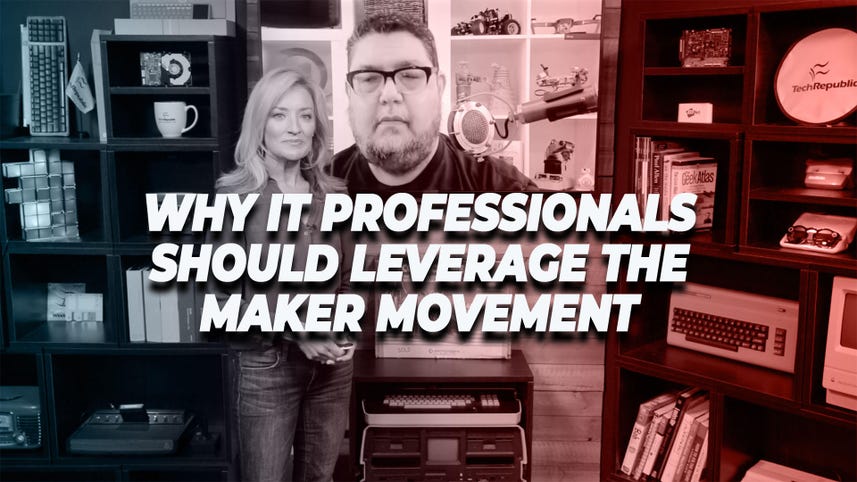 A few months ago, with the support ofZDNet's DIY-IT discovery series partner Zortrax, I was able to donate a large format 3D printer to my rural community's makerspace, which is located in an elementary school close to my home. I hadn't seen the facility before I delivered the printer since I'd only recently moved into town.

Honestly, I didn't expect much, even though I'd already been pleasantly surprised by the quality of our community broadband. This is a small, historic town of 8,000 people surrounded mostly by farm land. It doesn't exactly feel like a technological hotbed.

But, I was blown away. Our local makerspace already had a laser cutter, a vinyl cutter, an embroidery machine, about 10 smaller 3D printers, and a number of other pieces of equipment. It's a vibrant, active space, with highly engaged participants.

Our town is not alone in its support of local makers.

Also: Mass production 3D printing? It's coming, and it's a big deal

The rise of community makerspaces

It's difficult to track the number of makerspaces because they grow organically. They exist in community facilities, people's homes, and even inside businesses. In 2016, Popular Science counted 1,393 active public makerspaces -- a rise of 14x since 2006.

The National League of Cities Center for City Solutions and Applied Research has studied the maker movement and believes that making not only empowers individuals, but also can improve cities themselves:

The maker movement is centered in cities. And this new, hyperlocal manufacturing environment holds potential not only for individual hobbyists but also for community-wide advances in local entrepreneurship and job creation. Cities have a great opportunity to catalyze this movement as a way to improve our local economies, diversify workforce opportunities, and support the creative economy.

Makerspaces exist because of the rise of making. While humans have created, built, and crafted since the dawn of time, the modern concept of making is relatively new, fostered substantially by Make magazine and the Makerfaires it's been promoting for the past decade.

"When it comes to career building, let's not forget the value of hands-on experience," says James Connor, Dean of the School of Business and Information Technology and Co-Chair, General Studies at Northwestern Polytechnic University. "If you're, for example, an engineering school graduate, you'll be considered far more credible to potential employers if have solid academic performance and you've actually built and can demonstrate a complex project."

One of my favorite aspects of making is that it's all-inclusive and gender neutral. It encompasses everything from doll crafting to robot design, from scrapbooking to making furniture, from leatherworking to 3D printing. It's a word that embraces anyone who makes stuff, pure and simple.

Making is different from manufacturing, although making often leads to manufacturing. When someone designs a product, and builds a prototype, that can be considered making. Once that prototype is in active production, that's manufacturing. Now, combining desktop fabrication with crowdfunding, a very sophisticated prototype can be designed, and then the manufacturing funded by prospective customers.

Back then, if you wanted to produce a product, you had to contract with a domestic or offshore company to produce it. This was often insanely expensive, including setup fees and minimum production quantities, usually in the hundreds or thousands.

I had a self-funded startup with very unpredictable production requirements. We might sell five of a new product or 50, but we were unlikely to sell 500 or 5,000. We certainly couldn't afford to produce that many upfront.

So, we hacked together different available items: A used copy machine that only worked when a screwdriver was wedged just above its platen; a binding machine thrown out by a local print shop, boxes normally used for grocery distribution; a small shrink wrap machine; a floppy-disc duplicator powered partially by a windshield wiper motor and held together with duct tape and Erector set parts. All these, together, allowed us to produce packaged software products without minimums.

It was making and small-volume manufacturing way before it was cool. It was necessity being the mother of invention. And it helped me support a team of 15 employees.

What that pre-internet making process allowed us to do was take control of the problem. It allowed our small company to unconstrain our processes from the dominance of the then-current manufacturing paradigm. It let us uniquely tailor a solution to our needs and our budget.

When I think about what we could have done then with the internet, the cloud, and the resources we have now, it almost makes me weep. But it was all the work that all of us did back then that led us to the here and now, in our current world, where the output potential from making is extraordinary.

We can add computing technology to any project (or piece of a project) with a five-buck Raspberry Pi Zero. We can fabricate unique plastic parts, costing pennies with 3D printers costing a few hundred bucks. We can laser cut. We can engrave. We have inexpensive CNCs that allow us to cut wood and metal to precise shapes. We have the cloud.

We have -- and oh-my-gosh the power this gives --YouTube. Skills that used to be hidden away in guild-level apprenticeships are now shared freely online. For just about anything you want to learn how to do or learn how to make, you can turn to YouTube.

When I startedZDNet's DIY-IT Discovery Series on 3D Printing in 2015, I had never used a 3D printer. I had no idea what to expect. I'd seen some projects done on YouTube and I was intrigued, but I was not much of a fabricator. Sure, I hacked together some projects back in the 90s, but the closest I ever got to power tools was a Dremel rotary tool and a soldering iron.

Now, suddenly, I was able to fabricate brackets, mounts, custom holders, and even replacement parts. The sense of empowerment was amazing. But it wasn't just an emotional benefit. I built tangible solutions. A number of these were parts for use in the studio.

I built a bracket to hold my mixer on a rolling stand at just the right level. I built brackets to run cables down the side of that sound cart. I built brackets to hold power and audio distribution arrays to the lighting poles we use for our video interviews. While we probably could have gotten away with gaffer taping all these things together, by having custom bracketry I was able to organize and manage my gear without the distraction of terrible clutter.

Right now, at the exact moment I'm writing this sentence, I have two 3D printers producing custom dust collection adapters that connect to a combination disc and belt sander. It's one machine with two tools and two dust collection ports. What's annoying is that the diameter of the belt sander's port is 45.13 mm, while the diameter (on the very same machine, mind you!) of the disc sander's port is 47.15 mm.

Because of 3D printers, I can custom print adapters that work with this sander, and with an entire dust collection system I designed. Sure, I could have used some combination of existing gear and duct tape, but this is elegant, repeatable, and reliable.

More to the point, for a custom-made part generated in about three hours, there is no tooling fee, no setup fee, and no delay. Cost of materials for both adapters together is $0.23.

Production and manufacturing businesses are accustomed to building adapters and jigs. Volkswagen, for example, saved hundreds of thousands of dollars when it adopted Ultimaker 3D printers as part of its toolmaking process.

Outside of software tools, IT operations are not commonly associated with building custom hardware solutions. But as data centers have scaled, many IT operations have been faced with custom building racks, fabricating cabinets, and finding new ways to optimize space, cabling, and power. Backblaze, for example, designed and built its own custom storage pod using off-the-shelf hard drives.

Whether its metal fabrication for the custom creation of storage pods, woodworking for the production of incredible works-of-art computer cases, custom plastic parts built for studio production, or a mix of tiny computers and a wide range of materials for robotics and drones, making can be as much a part of IT transformation as it is part of manufacturing and production.

For the past three years, our hands-on making projects here on ZDNet consisted primarily of 3D printing. But not every problem can be solved and not every need can be met solely by extruding plastic out of a 0.4 mm nozzle. Many projects involve a mix of processes and fabrication techniques, ranging from 3D printing to laser cutting, from woodworking to metal fabricating, from soldering to using a CNC to carve an object from wood or metal.

As we move forward, we're going to bring you a wider ranging of making techniques both to help you expand your horizons and solve more problems, innovate with more flexibility and dynamic range. I've given you a first look at the Dremel laser cutter, and we have more projects on the way. I'm also working on the ultimate cable organizer, which combines small-tool woodworking with CAD and 3D printed jigs.

Even more projects are on their way after that. But it's not just the projects I'm going to bring you. You -- all of you out there -- have incredible power, resources, and opportunities at your fingertips. If you don't have access to tools like CNCs, laser cutters, and 3D printers at your office, check out your local community makerspace. No doubt there will be a bunch of your fellow makers who would love to show you the ropes.

Making is unquestionably a movement. It's gotten the bulk of its attention from hobbyists, garage makers, and educators. But making is also incredibly powerful for fostering growth, flexibility, and the innovative spark among small and large businesses alike.

Even if you've always been a software person, like I totally was, don't hesitate to pick up a saw, fire up a laser, extrude plastic, melt solder, and make sparks. You'll be shocked at how profound the benefits can be, personally as well as professionally.

And when you go out there and you do make something great, let us know about it. Post about it in the comments below or reach out to me. I'd love to spotlight awesome projects by ZDNet readers, so don't hesitate to share.

Give your kids a leg up with these $99 online masterclasses

Deals
Why is my internet so slow? 11 ways to speed up your connection