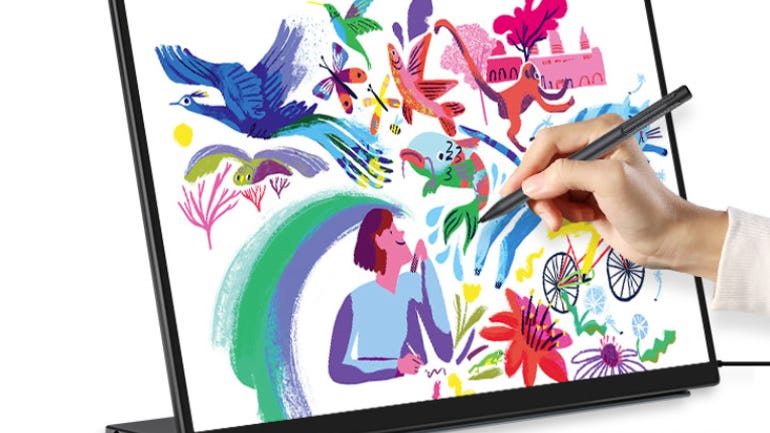 I am not too keen on portable monitors. Many appear clunky, often have poor resolution, and the touchscreen is usually slow to respond. But the Mako 15.6-inch touch screen portable monitor has blown me away.

I love having dual screens when I work. The ability to have two or more documents open at the same time is incredibly useful for me. The Mako portable monitor not only has a really solid look and feel but is also super responsive.

The monitor comes in three versions: The Mako, Mako Pro, and Mako Max. It is well-built and sturdy, with a kickstand hinged at the front that folds flat against the monitor. It has a viewing angle of 89 degrees to 178 degrees.

You can work with the screen vertical or rest the screen on its kickstand for a more horizontal way of working.

The Mako has a viewable area of 344 x 194mm and a 10-point capacitive screen. There is a minimum bezel, giving the display a nice look.

I also received a carry case, but I do not know if this is to be shipped as standard with the monitor.

On the right-hand side of the kickstand, there is a 3.5mm audio jack, a dial wheel to confirm the On Screen Display (OSD) options (USB-C or mini HDMI), and a touch button for OSD.

On the left-hand side of the kic stand, there is a micro USB port and two USB-type C ports for power or audio/video and touch screen transmission. There is also a mini HDMI port.

The monitor also has an optional 6,000mAh battery, which is available for the 1080p models.

The screen has LED for backlighting and 250cd brightness. The Mako Pro has 350cd brightness. Each model has two 1W speakers. I think you would need to use the headphone jack to hear anything if you were working in a busy coffee shop.

The Mako monitor also has an optional stylus available ($39) and a screen protector ($9.90), which is included if you buy the Mako super classic bird version of the monitor from the Indiegogo early bird offer

I could not get it to work from my IBM Thinkpad, nor my Surface Pro laptops. However, it worked perfectly when connected to my (older) Dell laptop.

I also had variable success with my three Android phones. Only one of them connected successfully. However, once connected, the touchscreen was so good, I did not want to return to using just the phone.

All in all, the Mako touch screen monitor is a great portable ultra-slim monitor that is stable on its stand, stylish to look at, and responsive to touch.

For under $360, (with a special offer perk currently) you get a high-quality versatile device that will connect to gaming consoles, laptops, or mobile phones. It would be a great addition to your home office set up, with the added bonus that you could take it anywhere.