Don't expect any more big Apple events until WWDC, unless...

Apple has finally stepped up and updated its products. (Why do we even need to say that?) Now that it has, don't expect anything new for about a year. That is, unless...
Written by David Gewirtz, Senior Contributing Editor on Nov. 1, 2018

It's almost a year since Apple introduced the iMac Pro. While a processor bump is possible, it's unlikely that alone would justify an event of Apple scale.

It has been almost 18 months since the iMac itself had a spec boost. And as I mentioned in my iMac fantasy article, it's been years since Apple's changed the form factor. But is Apple likely to do a major change for a product that's worked so well? Unlikely, at least to the extent that a big event would be justified.

The MacBooks Pro and Air have had very recent upgrades, as has the Mac mini. How great is it that I can finally say that? So, the "it's hanging out there and needs an upgrade" meme isn't valid anymore.

Don't expect much in the way of iOS

OK, fine. The iPad mini might need some love. It's been three years since that device has got an upgrade. But with the iPhone XS Max coming in at 6.5 inches diagonally, is there really a need for a 7.3 inch iPad mini? Yes, the iPad mini could be upgraded with the new home buttonless iPad design, but would that justify a major event? I think not.

iPhones? Well, we know that's always in September. So don't even think about new iPhones for a while. Same with the Apple Watch. That just got a ginormous update, and while we're still waiting for EKG, it's unlikely to be a major event driver, at least until September.

iPads just had a major update, and while the base $329 iPad might get a bump, it, too, isn't worth an event. 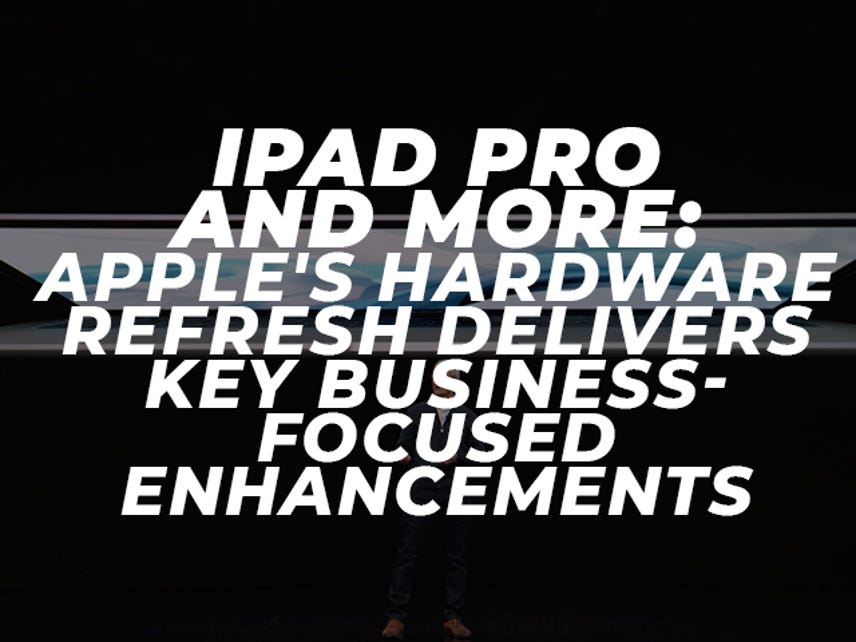 HomePod: This Alexa-wannabe was released just last February, but Apple might want to bump it again this coming spring. This would make more sense if Apple has some sort of unified home strategy it's going to want to show.

Apple TV: The fifth-generation Apple TV is now over a year old. Again, with the huge growth of Alexa, Roku, and even Google in TV interfaces as well as home control, Apple TV is ripe for a major home hub update.

AirPods: AirPods are a bonafide winner, but they're now growing a little long in the ear. As of next month, they will have gone two years without an update. Given how many devices no longer have a headphone jack and how tremendously popular the AirPods are, Apple is well overdue in offering an update.

AirPower: This charger, announced years ago, is missing in action.

iPod touch: Hey, I had no idea Apple was still selling this thing, but it is. Last updated in 2015, the current iPod touch might justify an upgrade as part of an overall home and audio strategy.

That's what we're looking at. Unless Apple comes out with its own VR goggles, a car, or something else unexpected, there's a slim chance you'll see a home and audio event in the spring (but don't get your hopes up). Otherwise, just settle in for the winter, enjoy the spring, and wait until June for the new Mac Pro at WWDC.

Whether pros and developers collectively let out a sigh of relief, gasp in horror (think 2013 Mac Pro), or choke on price points, we'll all know at WWDC.

The best Mac deals right now: Save $300 on the M1 MacBook Pro

The best Mac deals right now: Save $300 on the M1 MacBook Pro

EU rules that all smartphones, including iPhones, must support USB-C charging

EU rules that all smartphones, including iPhones, must support USB-C charging