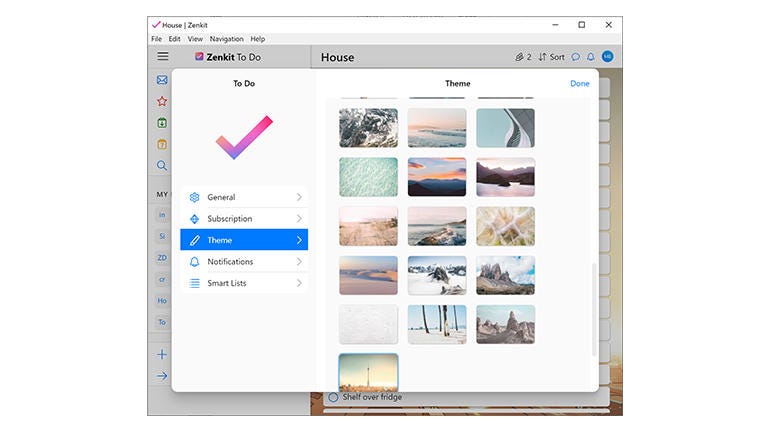 Although it was initially built by the Wunderlist team, Microsoft To Do hasn't had quite the same enthusiastic reception as Mobile Outlook replacing Accompli and Sunrise. Now that Wunderlist has been turned off (five years after the acquisition), plenty of tools are pitching themselves as a replacement, including a simpler to-do-focused version of the Zenkit task management service.

Like the full service (now known as Zenkit Base) with which it integrates, Zenkit To Do is free to use at the base level -- if sharing tasks with up to seven other people and the limits of 100 lists, 10,000 tasks, 20 folders and 500MB of space for attachments is enough for you. If you want more items, more space or to share tasks with more people, you can upgrade to different plans that also offer more features. If you need recurring items for tasks you do every month or once a year, to add tasks to a list by email, custom themes or to see tasks from the main Zenkit system, Zenkit To Do Plus is $4 per user per month. Business features like auditing, user and group management, central provisioning and single sign-on cost $19 per user per month.

There are Zenkit To Do apps for iOS, Android, Windows, Mac and Linux (including as a Snap). They're all PWAs, and while most features work offline, not all do -- you can assign a task but not mark it as important, and you don't yet get reminders offline, for example.

Zenkit To Do is deliberately designed to resemble Wunderlist, down to the option of having the Berlin TV tower as the background to your lists (albeit in Zenkit's own illustration style); it has many similar features and can even use your existing Wunderlist tasks. Now that Wunderlist has shut down you can no longer import those tasks directly, but if you import them into Microsoft To Do, Zenkit can copy from there (that will work until June 30, 2020). You can also create a ZIP file at export.wunderlist.com until November 15, 2020 and Zenkit tells us it will add a way to import those lists and tasks.

Lists, tasks, sub-tasks and due dates all import correctly, but if tasks are shared or allocated to other people it's a bit more complicated because even if those people also use Zenkit, the app doesn't know who they are. You can send out invitations easily, but if you use the same name for them, you end up with that name listed twice and you have to hover over exactly the right spot to see a tool tip that helps you work out which is the orphaned import and which is the live account. The only way to get rid of that disconnected name is to delete it from every task it's assigned to and invite the real contact. We also ended up with two anonymous Wunderlist users listed for a while.

As with the main Zenkit service, invitations are rather chatty, with a new mail sent every time you add someone to another list or assign another task; these sometimes arrive more than once, and occasionally add the same person to the task more than once, or the assigned task will sometimes vanish and then reappear. A nice option is that you can email a whole To Do list with checkboxes, including completed tasks already ticked off, to someone if they're not using Zenkit but still need to know what's happening.

If you have one of the paid-for plans you can also bring in tasks from the Zenkit Base service, and see To Do lists there. You have to connect each list or Zenkit collection individually and you have to add collections from the main Zenkit app, not from To Do. It's a little tedious, but it does make sure that your To Do lists aren't swamped by large work projects and your personal tasks don't automatically appear in your work project system.

Many other features are similar to Wunderlist (and Microsoft To Do): you can switch to dark mode, attach files, add multiple steps to tasks and set due dates and reminders. Having tasks repeat needs a Plus subscription. Oddly, you have to set a due date before the option to create a repeat appears, but there are more options for setting the date of monthly repeats than in Microsoft To Do (you can pick the first or last weekday of the month as well as a specific date, for example), although this still doesn't match the flexibility of repeating tasks in Outlook.

We do like the optional ability to see task details as a popup window rather than a pane, although we'd prefer it if you could set that as the default option rather than having to first open each task as a pane and then expand it.

Zenkit To Do also has similar 'smart' lists to Wunderlist and Microsoft To Do, showing starred tasks, tasks assigned to you by other people and tasks that are due soon. However, it doesn't match the full range of smart lists in the Microsoft app. Zenkit shows tasks for today and the next week, which is a different approach from Microsoft My Day, where you get to choose what you want to see on the list by dragging or swiping individual tasks, with a separate Planned smart list of all tasks with a due date. Zenkit also doesn't pick up flagged emails from Outlook as tasks the way Microsoft To Do does.

Confusingly, when we first looked at the list of starred tasks, there was a tool tip with instructions for creating extra smart lists by making your own labels, but that only works with Zenkit Base.

Search is a separate pane so it doesn't replace the task list you're looking at. And if you've archived completed tasks rather than just hiding them, you can search just your archive -- although you can't choose to only see outstanding tasks in search results. Tags and @ mentions are planned features -- there's nothing to stop you using a #tag in a task now, but clicking it won't search for all tasks using that tag the way it does in Microsoft To Do.

Notification options are comprehensive and include native OS options like toast on Windows as well as a pop-up in the web app. You can even get reminders by email, although again, we got two reminders for the same task at the same time. However, there's no option for pinning a specific list to your home screen as an Android widget (or Windows live tile) the way you can with Microsoft To Do.

Zenkit has a few dozen integrations including Slack and Teams and you can use Zapier to trigger actions and connections with other services, but those need one of the subscriptions that include the full Zenkit service.

Generally, the To Do interface is self explanatory, but finding your profile to change things like the date format is confusing: you click on your initials in the top right corner and then click on your name again rather than choosing Settings, which is where you change other options like the theme.

There are some useful features on the roadmap, like getting tasks with due dates as an iCal feed and the ability to add tasks by sending (or forwarding) an email. Until those arrive, this is a useful but fairly simple task list system that needs a subscription to unlock the advanced options. But with Wunderlist gone, there may be an opening in the market for something with a similar flavour and without the strong Microsoft integrations that make Microsoft To Do more useful the more Microsoft products and services you use.

Microsoft to rebrand Planner app in Teams as 'Tasks'

Join Discussion for: Zenkit To Do, hands on: Task management,...