The Chinese company claims it was the last resort following lengthy negotiations with Verizon.
Written by Aimee Chanthadavong on Feb. 5, 2020 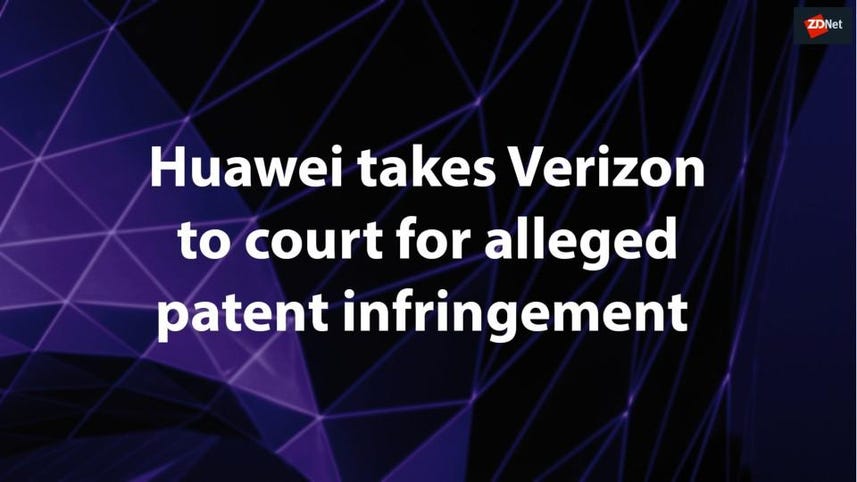 Huawei has launched court action against Verizon alleging that the US telecommunications giant infringed on its intellectual property rights.

The Chinese company filed the lawsuit against Verizon in the United States District Courts for the Eastern and Western Districts of Texas, seeking compensation for Verizon's alleged use of patent technology that is protected by 12 of Huawei's US patents.

"Verizon's products and services have benefited from patented technology that Huawei developed over many years of research and development," Huawei chief legal officer Song Liuping said in a statement.

According to Huawei, the lawsuit comes after unsuccessful negotiations to reach an agreement on licence terms between the two companies "for a significant period of time".

"For years now we have successfully negotiated patent license agreements with many companies. Unfortunately, when no agreement can be reached, we have no choice but to seek a legal remedy," Song said.

"This is the common practice in the industry. Huawei is simply asking that Verizon respect Huawei's investment in research and development by either paying for the use of our patents, or refraining from using them in its products and services."

Huawei is currently facing charges in the US for allegedly stealing trade secrets from T-Mobile. The alleged activity occurred during 2012-13, and relates to Huawei's attempts to build a robot similar to the one T-Mobile was using at the time to test mobile phones.

The US indictment related to the case alleges Huawei offered bonuses to employees for stealing information, before clarifying to its US employees that such behaviour would be illegal.

"The charges unsealed today clearly allege that Huawei intentionally conspired to steal the intellectual property of an American company in an attempt to undermine the free and fair global marketplace," FBI Director Christopher Wray said in January.

The Chinese giant pleaded not guilty. A trial has been set for 2 March 2020.

In addition, Huawei, along with its CFO Meng Wanzhou, is also facing a separate 13-count indictment from the US for allegedly violating US sanctions by misrepresenting its business dealings in Iran to at least four banks.

Also: The winner in the war on Huawei is Samsung

In June last year, Huawei revealed it had over 10 outbound licence agreements for which it had received over $1.4 billion since 2015, achieved through "amicable negotiations".

At the same time, Huawei has paid more than $6 billion in patent royalties since 2001, with nearly 80% paid to companies from the United States.

In 2003, Cisco sued the Chinese giant for infringing on its patents and copying its source code.

Almost a decade later, Cisco called Huawei out for stating the suit was unjustified, and challenged Huawei to release an expert report from the time on the incident.

"In fact, within a few months of filing suit, Cisco obtained a worldwide injunction against sale by Huawei of products, including our code for a Cisco-proprietary routing protocol called EIGRP, and Huawei publicly admitted that the code had been used in their products and they pledged to stop," Cisco's senior vice president, general counsel, and secretary Mark Chandler said at the time.

Huawei to DoJ: We didn't steal smartphone camera patent
Huawei has rejected claims it ripped off an inventor's camera design.

United States unseals charges against Huawei and its CFO

The United States is charging Huawei with conspiracy, fraud, obstruction of justice, and IP theft.

Huawei the biggest filer of patents with the EPO in 2017
Huawei filed 2,398 patent applications with the European Patent Office in 2017 out of a total of 166,000 for the year.

AI & Robotics
Hiring developers? This is how many interviews it takes to fill a job

Professional Development
How to get Photoshop for free