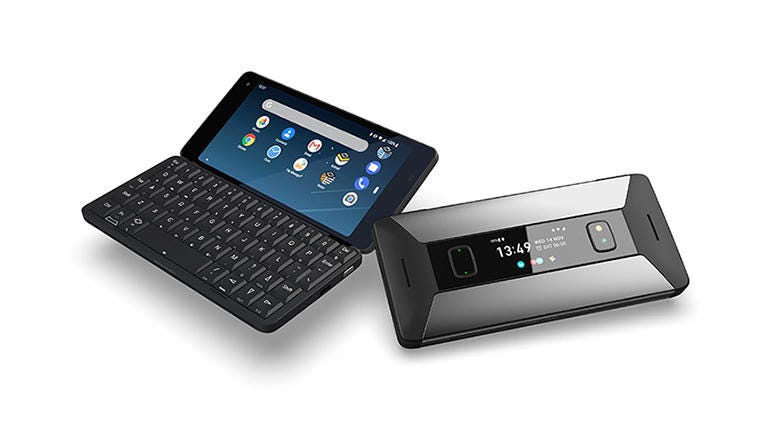 The Cosmo Communicator is Planet Computers' second attempt to reinvent the much-loved Psion Series 5 for the smartphone age in an Android/Linux incarnation. Its clamshell form factor includes a slide-out keyboard, and some functions are manageable without the need to open the device. It's an idea that has generated a lot of attention, but does this £665.83 (ex. VAT, or £799 inc. VAT) handheld computer/smartphone have a place in your tech armoury?

Time was when smartphones with keyboards were a thing. There were slide-outs, hinged lids, and full frontal (Blackberry-style) keyboards. Before that there was the Psion Series 5 (and some smaller variants too), with a hinged lid protecting a monochrome screen and a slide-out keyboard that was simply world class. Mobile comms was not integrated into the Series 5, but it was an awesome little computer. I used one for a long time as a pocket-sized writing machine. It wasn't just me: the Series 5 was iconic.

Various attempts have been made to resurrect the Psion Series 5, and the most recent have come from Planet Computers. The UK company's first shot, the Gemini PDA, was intriguing but had its drawbacks. The Cosmo Communicator moves the idea on, importantly including functionality into the lid, which is a real boost to usability.

This is a big beast compared to a standard smartphone. The footprint -- 171mm long and 79.3mm deep -- is similar to that of a large-screen (6.5-inch) smartphone, but it's a great deal thicker. The Cosmo Communicator measures 17.3mm thick at its thickest point, which is the slightly raised centre of the lid. It's a weighty device too, at 326g.

Where the Gemini PDA had a featureless lid, the Cosmo Communicator has a fingerprint sensor, a 24MP camera with flash and a 1.91-inch AMOLED touch screen. The latter is vital to the device's usability. With the Gemini PDA it was necessary to open the clamshell to do pretty much anything. Here, the screen provides information and caters for some interaction. For example, it will show a notification when a text comes in, and you can then tap the screen to dismiss it or initiate a response -- you have to open the clam to actually type a reply, but when you do so you're taken right to the SMS app.

Incoming emails are displayed here too, and while you can only see the beginning of a message, it might be enough to encourage you to open up and reply -- again, when you do open the clam, the relevant app is right in front of you making the process of responding as fast and seamless as possible.

More than that, there is a basic menu on the front screen. The fingerprint sensor is incorporated in a small touch pad. A single press of the pad calls up the main front screen, showing time and date, and a few system icons (Bluetooth, battery, wi-fi and SIM status). Tapping the pad opens another screen showing recent calls, and it's easy to call a number on the list with a tap. Tiny icons allow you to access contacts and a dialpad so you can initiate new calls, and once in a call there are tappable icons for things like speaker mode, muting and adding contacts into a call.

A further screen gets you into a menu of eight shortcuts to features like camera, video, torch, power and settings for the tiny front screen -- you can change its orientation and brightness for example, and even allow it to auto rotate.

This front screen is superbly functional and its presence here gives a big boost to usability compared to the Gemini PDA. True, the various interactive icons can be very small, but it's responsive and I found myself happily dismissing text messages and taking voice calls without opening up the device.

Open up the clamshell and a full QWERTY keyboard slides towards you. This is the heart of the Cosmo Communicator, and its resemblance to the old Psion Series 5 is no coincidence. Indeed, the designer of the original Series 5 keyboard, Martin Riddiford, had a hand in its creation. The Cosmo Communicator's backlit keyboard has a softer, less definite feel than the Psion Series 5's, but the similarities are obvious.

I found that some keys failed to register with my usual light touch, and I had to modify my speed and typing action slightly to compensate. But still, I was able to touch type at about 75 percent of my usual speed, which is good going for such a small keyboard.

The keyboard meant I could use the Cosmo Communicator for serious document creation -- this review was written on it, for example. I worked on writing projects while out and about, although I had to be at a table as thumb-typing while standing with the device opened up or trying to rest it on my knees were both unsatisfactory. However, I would take the Cosmo Communicator into meetings to write notes in preference to my laptop. It wouldn't be my constant typing device, but it would be the right fit for some occasions.

The Cosmo Communicator's main 5.9-inch 2,160-by-1,080-pixel screen is designed primarily to be used in landscape mode, but it will rotate into portrait mode to accommodate the fact that Android apps are, by and large, designed to be used in this orientation. However, holding this device with the screen in portrait mode is awkward and unwieldy.

The Cosmo Communicator runs Android 9 with a Cosmo overlay that includes a number of bespoke apps. LEDIson was shipped with the original Gemini PDA and allowed callers and notifications to be identified through a series of configurable LED lights on the device. It's here again, even though it's redundant because the front screen tells you who is calling, texting, emailing and so on.

Pre-installed third party apps include Word, Excel and Skype, all of which are rather more useful. In its own software suite, Planet Computers has also gone to great pains to reproduce arguably the killer app of the Psion Series 5: Agenda. This diary app provided a clean presentation of my weekly diary, synced from Google Calendar, and also has superb year planner and monthly free/busy views. I also quickly became a fan of the Notes app, which can capture text, images, videos and voice recordings.

Tapping the key to the left of the space bar calls up a software menu bar that emulates the hardware-based bar on the original Psion Series 5, providing quick access to a range of apps. It's arguably unnecessary given the tappable app shortcuts, but is nonetheless a nice bespoke feature.

The Cosmo Communicator runs on a MediaTek Helio P70 chipset with 6GB of RAM. This platform delivered average Geekbench 5 scores of 296 (single core) and 1471 (multi-core), which are distinctly middle of the road.

You might feel that 128GB of internal storage is not enough, considering that 13GB of this is used by the system itself. There is a MicroSD card slot for external storage, but using that rules out the device's second SIM slot. That's a shame, although the device does also support eSIMs. At least the SIM caddy is accessible on one of the short edges of the lid section; with the Gemini PDA you had to remove the top of the lid section to get at the SIM slot.

Connectivity is a key element of the Cosmo Communicator's functionality. It supports Debian Linux, and if you are so inclined the device can be connected to a monitor and an external keyboard and used like a PC. Well, in theory. In fact, Linux support wasn't implemented at the time of writing -- watch the support pages if you're interested in this aspect of the device.

The Cosmo Communicator has two cameras: an outward-facing 24MP camera, and a 5MP camera to the top left of the main screen. The internal camera works fine for video calling, while the main camera is OK for shooting basic photos, but there's little in the way of sophistication here. If you need more than the basics, look elsewhere.

On paper, the 4,220mAh battery should deliver at least a day's use, but in practice battery life was disappointing. The PC Mark battery test reported just 6 hours and 13 minutes, and during testing I used 50% of a full battery in about three hours of typing on several occasions. If you're serious about using the Cosmo Communicator for everyday productivity, you'll need to look out for charging points during the day.

The Cosmo Communicator is another intriguing device from Planet Computers, and definitely an advance on its Gemini PDA predecessor. When the Linux capability becomes available, it will have even greater appeal. Having relatively fast keyboard input available on such a small device is very attractive, and the bespoke apps are nicely designed and well realised. The Cosmo Communicator could even replace a laptop for some or all of the time, at least for some people.

However, £799 (inc. VAT) buys you a decent laptop, and large-screen smartphones can be coupled with folding Bluetooth keyboards. This means that the Cosmo Communicator may struggle to get traction outside a relatively small niche, unless Planet Computers can find a way to reduce the price tag.

Gemini PDA: A long-term evaluation of the reborn Psion Series 5

The Surface Duo is a phone