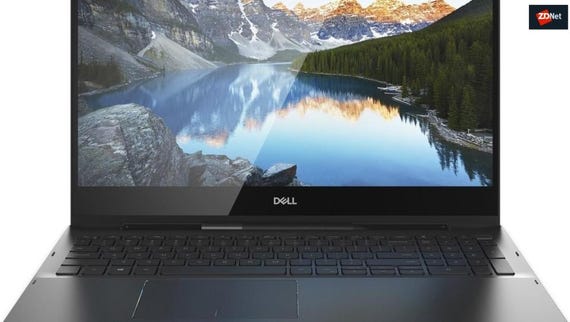 Dell has unveiled its Inspiron 7000 2-in-1 at CES 2019, with the company incorporating artificial intelligence capabilities to sense where the laptop is located and adjust performance accordingly.

Dell's adaptive thermal technology adjusts the heat profile based on physical use and movement, according to the company.

"This allows the product to detect when it is sitting on a desk or if it's being handled or being moved around or sitting in your lap and in tablet mode or different 2-in-1 mode," Dell Client Product Group president Jay Parker said.

"That means it can adjust the performance profile so that it generates less heat when it's mobile, or it can ramp up performance when it's sitting on a table."

The new Inspiron also comes with a hinge design that stores a full-size Active Pen inside, so that the user is always presented with the pen no matter what mode the device is in. The hinge also vents out hot air.

"A significant amount of engineering had to go into this hinge; a new, innovative design for routing cables from the laptop to the screen had to be developed and is in the process of being patented," Dell explained.

The new keyboard comes with a fingerprint reader and power button in one integrated key, with the device also slimmed down from its previous iterations.

The Inspiron comes in 15- and 13-inch options, and will be available in May, with pricing yet to be announced.

Across its gaming business, Dell also announced that its G5 and G7 laptops will come with 8th-gen Intel Coffee Lake H 6-core CPUs and next-gen Nvidia GeForce RTX 20-series graphics in a slimmer chassis, and will be available with Alienware Command Center.

Alienware meanwhile announced the Area-51m desktop replacement notebook, calling it the first and only gaming laptop with 9th-gen 8-core desktop processors, as well as upgradeable CPUs and GPUs.

Claimed as a "true desktop replacement", the Area-51m will come with an Nvidia GeForce RTX 2080 graphics card, which will be overclockable from 150 watts to 180 watts, and contain Intel's Z390 desktop chipset.

"Our new flagship notebook supports the upgradability of its discrete Nvidia GeForce RTX graphics as well as 9th generation Intel Core i7 and i9 processors. Overclocking tools available within Alienware Command Center enable the Area-51m to accelerate the performance of its graphics and processors," Dell said.

Lastly, the Alienware m17 is the company's "first thin and light gaming notebook", according to the company.

It also has an optional 90 watt hour Lithium-ion battery, weighs in at 2.63kg, measures 23mm x 292.5mm x 410mm, and is available in Epic Silver and Nebula Red colours.

Dell also announced the new Latitude 7400 2-in-1 ahead of CES 2019, with the company claiming a battery life of 24 hours and a new proximity sensor to improve security and battery.

Intel will provide the technology behind a push for gigabit-speed Wi-Fi 6 and 10-gigabit symmetrical speeds across cable networks under a partnership announced with Comcast at CES 2019.

Alibaba is combining its cloud with upcoming Intel hardware to use AI algorithms and compute power for 3D athlete tracking.

Dell's new Latitude 7400 2-in-1 comes with a proximity sensor to improve security and battery.