Samsung is showing off its 5G smartphone prototype at CES 2019, giving users a first taste of what the device will look like.
Written by Corinne Reichert, Senior Reporter on Jan. 9, 2019 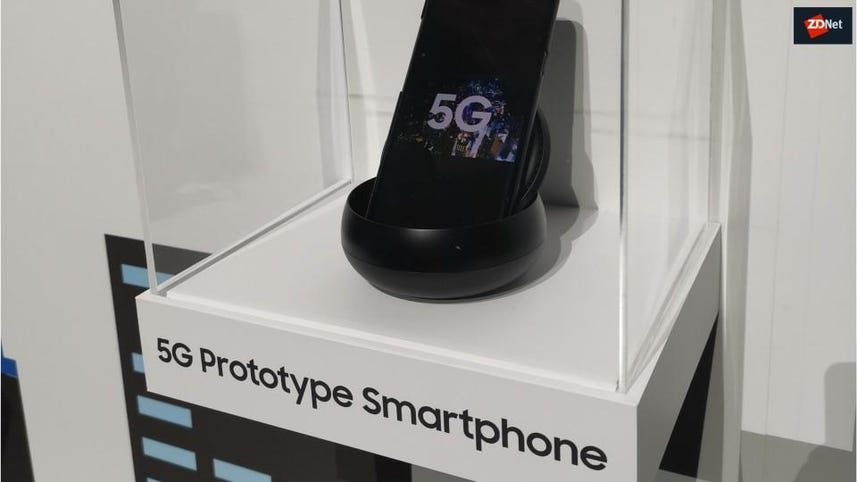 Samsung is showing off its 5G smartphone prototype at CES 2019 in Las Vegas, with the device on display on the showroom floor, albeit locked in a glass case.

Samsung retained the form factor of its current smartphones, with volume keys and Bixby button appearing to be on the left side of the handset and the power/lock button on the right side of the device.

The front-facing camera was also visible at the top of the device, with the phone being used to display Samsung's 5G goals on a looping video.

Samsung CEO HS Kim on Monday confirmed that the Korean tech giant will be releasing a 5G smartphone to the market this year, and has been providing a sneak peek of the device during CES.

Using the Samsung CES 2019 press conference earlier this week to outline the tech giant's end-to-end solution across the Internet of Things (IoT), 5G, and artificial intelligence (AI), Kim said Samsung is continuing to invest in R&D and has registered the largest number of essential patents.

From chips and devices to networking equipment, Kim said 5G is "here and now" thanks to Samsung's leadership.

"Our experience and effort have compelled commercialisation of 5G forward. In the US we're helping major carriers roll out 5G," Kim said, pointing to Verizon's live home 5G service in Houston and Sacramento.

Samsung is additionally running 5G trials with carriers across Europe and Asia, the chief executive said.

United States mobile carrier Sprint on Monday also revealed that it will be carrying Samsung's 5G smartphone, which is set to launch in summer 2019.

The Samsung 5G smartphone will connect to Sprint's LTE and 5G networks, using its 2.5GHz, 1.9GHz, and 800MHz spectrum bands.

"Samsung is one of our key 5G network infrastructure Massive MIMO providers, so we are delighted that they will also deliver one of our first 5G smartphones, putting blazing fast connectivity right into our customers' hands," Sprint CTO Dr John Saw said on Monday.

5G
Cisco Live: Hybrid work is broken and Webex has a plan to fix it