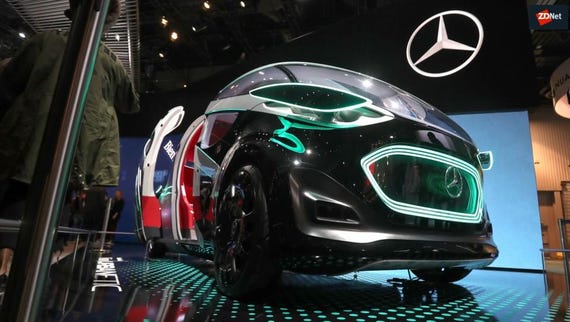 Nvidia has announced at CES 2019 in Las Vegas that it will be building out artificial intelligence (AI) architecture for Mercedes-Benz cars.

"We're announcing a new partnership going forward, creating a computer that defines the future of autonomous vehicles, the future of AI, and the future of mobility," Nvidia CEO Jensen Huang said on Tuesday.

Mercedes and Nvidia are aiming to develop a single system with self-driving capabilities and "smart cockpit" functions, rather than the current system involving multiple small processors known as electronic control units (ECUs), where each ECU controls separate parts of the car such as the windows, door locks, power steering, and braking.

"Centralizing and unifying compute in the car will make it easier to integrate and update advanced software features as they become available, whether for self-driving or AI-powered user experiences," Nvidia added.

"This supercomputer will enable Mercedes-Benz vehicles to run AI capabilities in the car and in the cockpit, from safe autonomous driving to innovative convenience features."

That AI system is now in seven car models, with nine more coming during 2019.

Mercedes and Nvidia are also working with Bosch to kick off a robo-taxi service in San Jose in the second half of 2019.

The Mercedes announcement comes a day after Nvidia announced Drive AutoPilot, a driver-assistance system for Level 2+ autonomous vehicles that integrates Nvidia's Xavier SoC processors with new Nvidia Drive software to process data from outside and inside the vehicle.

Nvidia is "for the first time pushing down into more mainstream driver systems", senior director for Automotive Danny Shapiro said on Monday at CES 2019.

On the eve of CES, Nvidia also announced that 40 new laptop models from every major OEM will feature RTX GPUs.

Jensen Huang, fonder and CEO of computer graphics chip maker Nvidia, showed off the achievements of his company's neural network technology during a press conference Sunday night in Las Vegas at the Consumer Electronics Show. He argues that a combination of deep learning and ray tracing, the simulation of real-world physics, is going to totally transform the computer graphics business.

Mobileye is aiming to provide an autonomous public transport solution in China by 2022, while it also delivers and develops advanced driver assistance systems with Great Wall Motors.

Sprint is combining its Curiosity IoT platform and its 5G mobile network to power a smart city in South Carolina and an autonomous vehicle test track in Georgia, and to launch more precise mapping technology.

Join Discussion for: CES 2019: Nvidia partners with Mercedes on...