According to View, which is selling SmartProtect as an add-on to its View Dynamic Glass, the system has coverage on all glass surfaces, requires no additional sensors and offers a real-time dashboard.

View's Dynamic Glass allows more daylight into buildings and office spaces while reducing glare. The goal is to reduce the need for blinds, optimize daylight and save on energy costs. View also pitches its Dynamic Glass as a wellness play that can make employees more productive.

SmartProtect represents View's first service on top of its Dynamic Glass. View plans more services on top of Dynamic Glass with personalization and wellness, digital security, connectivity and collaboration as possible, said Erich Klawuhn, vice president of product management at View. "When you have that digital skin on a building there are other applications," he said.

"We started with sensors that just measured light level on outside of building. Through that learning we learned it was an inferior way to control the glass because you'd need a sensor for every zone. Each building has 100s of zones and doesn't take into account occupants," said Klawuhn. "Today we create a geometric model for solar tracking, occupants and space. We have more daylight with the new algorithm."

Also: See: Smart Cities coverage | What is the IoT? Everything you need to know about the Internet of Things right now | NET Smart Home

View releases algorithm upgrades about once a quarter, he said. The upgrades are added as new conditions are experienced. In a nutshell, the skin of a building--the windows--create an IoT network. 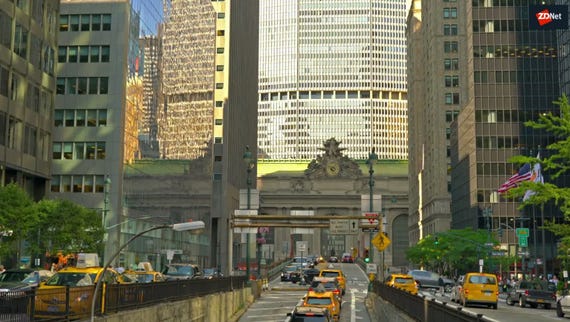